How To Save Your Planet

April 30, 2016
[Disclaimer: Below article is to be taken with a pinch of salt and if possible, with a pinch of cyanide. All views expressed here are personal. The author suffers from mild dementia and this article won't be held responsible for any damage to your IQ. Readers are advised to proceed at their own risk.]

What's up folks! Been ages since I last puked out crap here. Was busy disposing off dead bodies of people who were sending me Game Of Thrones spoilers. Now, that show is now really starting to get on my nerves. I'm just waiting for that episode where they'll finally introduce Hitler's character and he'll just put an end to this pandemonium, once and for all. I'd also love to see Frank and Claire Underwood fighting for that throne! Just imagine the sordid politics that would follow!

Moving on, there has been a recent uproar in the world, regarding climate change and global warming. Too much talk about saving our planet for a better future. Maybe Leo's Oscar acceptance speech has hit the right spot.

Climate change is a fascinating topic to speak upon. A slight misinterpretation of your opinions and you'll be labelled a 'pollution-spreading-life-contaminating' piece of shit, in no time. Anyway, I too believe that climate change is real. Well, at least the facts say so. Many people deny it. Even Donald Trump denies it. And if Trump is denying it, it's the fucking truth! No questions asked.

But frankly, I can't understand the logic behind environmentalists preaching us shit like "Save mother earth"
Oh, the arrogance! Damn. We haven't even learned to care for our fellow human beings yet but we want to save our planet. Okay. We live in times where people will be busy clicking pictures of an accident victim, rather than taking him to a hospital and saving his life.
"Hashtag road accident. Hashtag bleeding. Hashtag crying for help. Hashtag death. Hashtag LOL!"

But still, we've the audacity to preach bullshit about saving mother earth, on the internet! Hats off!

Firstly, you can't save mother earth. The reason behind this is that mother earth doesn't need to be fucking saved! It's us humans who need to be saved. Yes. That's right. Let me get this straight. We humans are a breed of selfish and greedy beings who only care about our own welfare. We wouldn't have given a damn had we lived on Mars and Earth were dying a slow death. We're concerned about this planet only because we live on this planet and we know we've got nowhere else to fuck off to. And that, if something bad were to happen to it, we would be the ones eventually suffering. Yes. Global warming and climate change have got us by the balls, and we're too ignorant to realize it.

Now you'll be wondering who's responsible for this climate change? Of course, it's us again! If we're to live happily or even exist in future, we have to do something to save this planet.


The next question that pops up is, "How the heck do I save this planet?"
It's pretty simple actually. If you look up on the internet, you'll find tons of articles on how to save the planet. The same old, 'plant trees, save water, save electricity, avoid using fossil fuels, go vegetarian, jerk off to solar energy and stuff.

Jokes apart, those are some pretty useful and effective methods to put into practice. But the best solution is...
Wait for it...
*Drumroll*

Yes. Just fucking kill yourself. How long till we realize that the planet's fine and that we're the ones who're screwed up badly. We're the ones who fucked up and dismantled this beautiful planet to its core. Just think about it. Our planet has been here since aeons. It has survived countless asteroids hammering it left, right and center! It has even survived meteor strikes, nuclear attacks, volcano eruptions, massive earthquakes, magnetic pole change and shit. And then we humans came along and managed to fuck it up like never before. We're the worst virus to have infected this planet with our pile of garbage. Even HIV would feel embarrassed about its existence and cry itself to death. Just look at ourselves. How insignificant we are, when compared to this vast universe. And yet, we've the arrogance and audacity to think that we can save this planet! The planet doesn't need your help, you morons. When the time comes, it'll just wipe us insignificant little shits, right off its face, just like Domex wipes off and obliterates those pesky commode germs.
If you look at the facts and figures, on an average nearly 200 species go extinct every year. And someday, we will too. 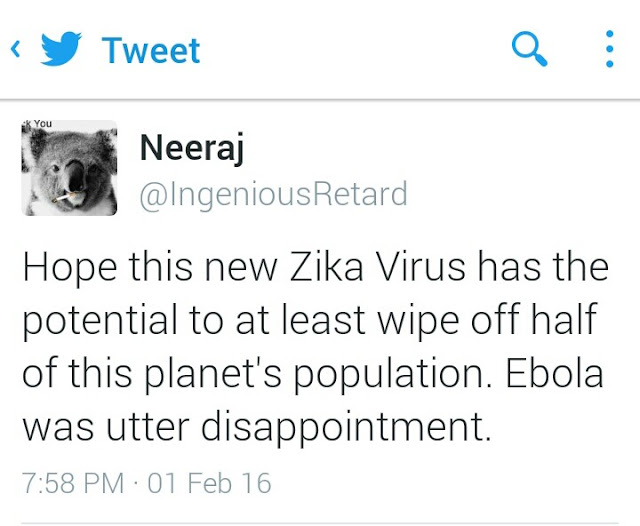 Even Hitler watching all this would be like, "I want to start a fucking genocide to destroy these brainless human waste of flesh, blood and bones roaming down there. But fuck it, I ain't got the balls to go back to that shithole!" 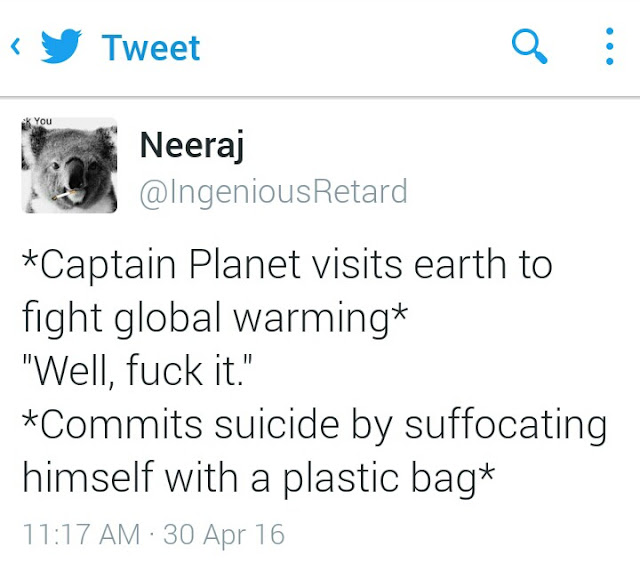 How the heck can we save the planet when we can't even save ourselves! We're too busy fighting among ourselves, to care for the welfare of mother earth.

A giant bag of plastic might not end up suffocating mankind to death, but a giant bag of hatred and bigotry will surely do the trick.
Save humanity first, planet earth can wait.

I'd like to conclude this one by quoting Ozzy Osbourne,


Your higher power maybe God or Jesus Christ,
It doesn't really matter much to me.
Without each other's help there ain't no hope for us.
I'm living in a dream of fantasy...

Movie:
The Man Who Knew Infinity (Ramanujan is what happened when God wanted to be a mathematician! Absolute masterpiece of a movie. Did justice to the legendary genius of Srinivasa Ramanujan. Don't miss it for the world!)
Song:
Don't Look Back In Anger - Oasis. (An amazing song by Oasis! Probably their best. A live version so beautiful, you just end up crying buckets. Noel Gallagher is awesomeness!)
Book:
The Importance Of Being Earnest - Oscar Wilde. (A light hearted classic masterpiece by Wilde! When it comes to subtle and witty epigrams, Oscar Wilde never disappoints.)

Well, that's enough bullshit for today. Feel free to express your criticisms, suggestions, abuses and everything in general in the comments section below. And please press that god damn 'share' button if you enjoyed reading it. If you didn't, well, I'm sorry to disappoint you. Thank you again, for bearing with me!

Popular posts from this blog

Between Artificial Intelligence and Humanity

Rest in peace, you genius. (Pic Source: http://www.risefeed.com/wp-content/uploads/2015/10/tumblr_n57nzzgZwf1tash9io1_500.jpg) Just the other day I was having a conversation with my friend on the topic of artificial intelligence. He is of the opinion that AI will eventually take all our jobs and this will lead to a major revolution in 21st century. Now there's a lot going in the world of artificial intelligence and machine learning. The hype is just tremendous with everyone trying to get on the AI train to reap profits and benefits from it. From humanoids implementing concepts of neural networks and deep learning to interact with humans to nanobots that cure cancer to algorithms that analyze your online behavior and manipulate you into buying that limited edition,'just-one-left-in-stock' inflated Pikachu doll, the possibilities are just endless and crazy. However, there are mixed opinions regarding the benefits or the dangers of this rapid technological advancement
Read more

We Don't Need No Religion

Disclaimer: If you're an extremely religious person or some sort of faith fanatic, stop reading this right away. My intention isn't to offend anyone. I'm just sharing my opinions and my viewpoint here. Yes. Feel free to flush it down the drain, if you disagree.  Thank You. If seeing this guy makes your blood boil, STOP READING. I REPEAT. STOP READING. (Pic Source:izquotes.com) What's up folks? Hope you're enjoying your Diwali vacations. I wish you all a very happy and prosperous Diwali! Yes. Asked God to spread happiness and peace all over, if not, he can go fuck himself. And yes, Happy Children's Day. Never kill that inner child in you. Never. Moving forward, Modi's in UK. Epic speech at Wembley, must say. I guess he's the second guy of Asian heritage to rock Wembley with such magnitude! After Freddie Mercury of course! (1986, Queen, live at Wembley) First Madison Square and now Wembley. A rockstar indeed! No. I’m not a ‘bhakt’ or somethi
Read more

Between News and Propaganda

No thanks. Recently I had the opportunity to read and educate myself a bit about the cult hype surrounding the Cobrapost sting operations. Now many of you might be knowing about it and many of you might be wondering which is this new breed of snake. For those who haven't heard about Cobrapost or anything related to it, it's a news/investigative portal that did a series of sting operations on various television, news and digital media platforms. The sting operations revealed how big media houses and digital companies are willing to sell religious/political propaganda and agenda through their channels and platforms for money. There were many big names involved in this scandal and the outrage on the internet regarding this was tremendous. Especially on Twitter and Reddit. The two least toxic social media platforms out there as of now. (Can't say that about Twitter anymore though) Now the outrage was justified. News and media channels are ideally supposed to be unb
Read more