Between Wits And Tits


Hello. What's up folks! So, finally Leonardo DiCaprio won an oscar and broke the internet. Well, got to admire him for his dedication and perseverance. The lad took more than a decade to rise after being drowned by Rose's love, in Titanic. Anyway, he deserved it!

Moving on, you might be wondering, "Did I just read 'tits'"
Yes, you can judge me for the uncanny way in which I metaphorize my titles. But basically, the idea behind this is that it draws your attention and maybe some traffic as well!

Anyway, choosing between beauty and brains is like choosing between David and Goliath or Adam and Eve. You just can't guess who's got the upper hand here. We live in a prejudiced society where people usually judge your by your external appearance. As they say, "First impression is the last impression"
So, you better make it worthwhile! Unless you dress up as a clown, with a chainsaw in your hand and go homicidal to scare the shit out of them.

I guess it all began during the stone age era. When folks were roaming around naked on this planet, hunting wild boars, creating fire and shit. Ah... they must have had a lovely time! But then imagine the plight of all those ugly looking folks of that generation. I think all the ancient art that we see was painted by those ugly introverts of that era, to express their love and woo their crushes. While the good looking ones were busy getting laid. You might have often noticed how some awful looking folks have a genius of a mind! On the contrary, some very good looking folks often come across as dimwits or dumbfucks. Well, that's the irony of life. It's pretty rare that you find someone who possesses both these things, beauty along with brains. They're indeed gems!

Believe me, external beauty is a great quality to posses. It's beguiling in its own way. It doesn't need to explain itself to anyone. And that's the most fascinating thing about it. You can easily tell if someone's beautiful or not, just by looking. You don't need to perform some complex integral calculus to prove whether someone looks charming or not. And admit it, attractive people often have it easy in their life. It's not like they don't have to struggle. But it's just that things usually come their way easily. They don't have to fight much to obtain something. But if you consider their grotesque looking counterparts, man, they have to slog their asses off to prove their grandeur.


It's natural human tendency to be attracted towards pleasant things. So, at this point you might feel that beauty has a upper hand here. Well, maybe it has. But then there comes this concept of 'inner beauty'
Whoever invented that shit was crafty enough to add the term 'beauty' as a suffix. I don't know what he must be thinking, but it sure does sound intriguing.

Now, 'inner beauty' is a very broad notion. It's like those Christopher Nolan's movies. If you understand it, you may find it whimsical. If not, you may find it utter nonsense. We generally use adjectives like 'intellectual', 'creative', 'talented', 'genius', ''kind', 'generous', 'humourous' etc. to justify someone's so called 'inner beauty'
We pale looking unattractive folks have to often show to this world that we too are beautiful in some way or the other. To get other people to like us. But the thing is, we've to show it. Show them a talent or a quality or something that can make up for our homely looks, unlike delightfully gorgeous folks. So, if you haven't got the looks, just grab those fucking books! 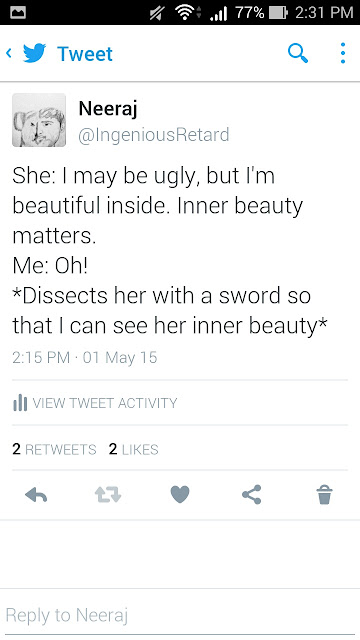 Women are the most beautiful and magnificent creatures on this planet. And will always be more beautiful than men, in general. They're so graceful and elegant in an exquisite way. While we're just taking pride in our beefed up muscles and that ball of fur called beard, growing on our face to hide its unlovely attributes. Come on, don't label me a feminist now. Anyway, it's just an opinion. There's a reason we call them the 'fairer sex' Now that's a whole new ideology and it's off topic. Maybe I'll discuss it some other day.
Okay. Too much of women empowerment shit. This is what happens when you listen to a Rahul Gandhi speech. It's like whenever the guy speaks, the collective IQ of our nation drops by nearly 50%. 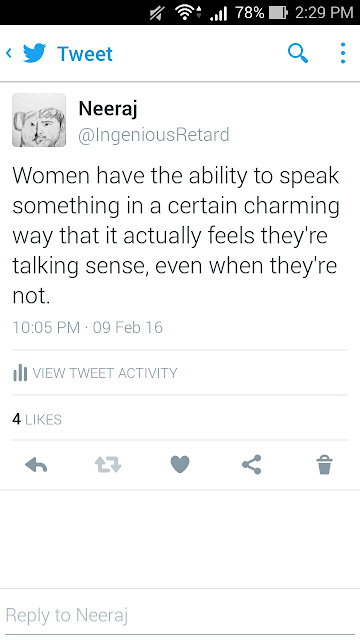 Also, external beauty is frequently attacked for being deceptive. For many a times, there lies a hideous person in the grab of  gorgeous. One must not forget that external beauty usually fades away with time, unlike intelligence. But then one's never sure about one's life. It's uncertainty is awfully amusing!  Who knows, when you might be on your way to Belize!

So, does that mean beauty always wins? Perhaps. The point here is that intelligence itself is a form of beauty. An abstract one. So, beauty and intelligence are nothing but the two sides of the same coin. And maybe god just flips this coin when we are thrown into this world. So, if you're either pretty and good looking or witty and intelligent, consider yourself lucky. You've got to worry when you don't possess either of these qualities. In that case, you're truly fucked. Yeah, I belong to that unfortunate category. I realized this when I was a small kid and I saw myself in the mirror for the first time and thought "Okay. You're fucked!"


Now, if you ask me to choose between wits and tits. I'd definitely prefer wits. But then that differs from person to person. For perception and situation my friend, is the matter. Who knows, when the time comes, I might even end up choosing the latter!

As Oscar Wilde had quoted in the classic, 'The Picture Of  Dorian Gray'

It's said that beauty lies in the eye of beholder. So, it's all about being beautiful to someone, in some way or the other. For instance, some may find grizzly bears cute and cuddly whereas others may find them vicious and beastly.
Some may prefer wits over tits and some the other way round.
Well, as of me, I'm dead sure that I'll end up dying alone! Okay, I'll end this here. Too much bullshit to digest, in one go!

Movie:
The Revenant. (The movie that ended Leo's oscar drought!)
Song:
Do I Wanna Know? - Arctic Monkeys. (This song is stuck in my ears since weeks! Alex's vocals combined with that eccentric Sheffield accent! This is their best work! Do listen to it if you haven't!)
Book:
The Picture Of Dorian Gray - Oscar Wilde. (This is one of those classic masterpieces which you cannot afford to miss! The unconventional philosophy and Oscar Wilde's genius for epigrams! It's one of the best books ever written in the history of literature!)

I've modified the look of this website, how's it?
This one hasn't been proofread, as I've now started developing a sense of confidence on my amateur grammar skills.
Anyway, feel free to express your criticisms, suggestions, abuses and everything in general in the comments section below. Do let me know whether you enjoyed reading this one and share it with your friends if you did. Thank you for reading this piece of shit.

Popular posts from this blog

Between Artificial Intelligence and Humanity

Rest in peace, you genius. (Pic Source: http://www.risefeed.com/wp-content/uploads/2015/10/tumblr_n57nzzgZwf1tash9io1_500.jpg) Just the other day I was having a conversation with my friend on the topic of artificial intelligence. He is of the opinion that AI will eventually take all our jobs and this will lead to a major revolution in 21st century. Now there's a lot going in the world of artificial intelligence and machine learning. The hype is just tremendous with everyone trying to get on the AI train to reap profits and benefits from it. From humanoids implementing concepts of neural networks and deep learning to interact with humans to nanobots that cure cancer to algorithms that analyze your online behavior and manipulate you into buying that limited edition,'just-one-left-in-stock' inflated Pikachu doll, the possibilities are just endless and crazy. However, there are mixed opinions regarding the benefits or the dangers of this rapid technological advancement
Read more

We Don't Need No Religion

Disclaimer: If you're an extremely religious person or some sort of faith fanatic, stop reading this right away. My intention isn't to offend anyone. I'm just sharing my opinions and my viewpoint here. Yes. Feel free to flush it down the drain, if you disagree.  Thank You. If seeing this guy makes your blood boil, STOP READING. I REPEAT. STOP READING. (Pic Source:izquotes.com) What's up folks? Hope you're enjoying your Diwali vacations. I wish you all a very happy and prosperous Diwali! Yes. Asked God to spread happiness and peace all over, if not, he can go fuck himself. And yes, Happy Children's Day. Never kill that inner child in you. Never. Moving forward, Modi's in UK. Epic speech at Wembley, must say. I guess he's the second guy of Asian heritage to rock Wembley with such magnitude! After Freddie Mercury of course! (1986, Queen, live at Wembley) First Madison Square and now Wembley. A rockstar indeed! No. I’m not a ‘bhakt’ or somethi
Read more

Between News and Propaganda

No thanks. Recently I had the opportunity to read and educate myself a bit about the cult hype surrounding the Cobrapost sting operations. Now many of you might be knowing about it and many of you might be wondering which is this new breed of snake. For those who haven't heard about Cobrapost or anything related to it, it's a news/investigative portal that did a series of sting operations on various television, news and digital media platforms. The sting operations revealed how big media houses and digital companies are willing to sell religious/political propaganda and agenda through their channels and platforms for money. There were many big names involved in this scandal and the outrage on the internet regarding this was tremendous. Especially on Twitter and Reddit. The two least toxic social media platforms out there as of now. (Can't say that about Twitter anymore though) Now the outrage was justified. News and media channels are ideally supposed to be unb
Read more